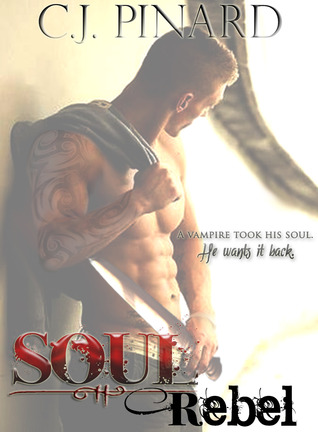 Blurb: When 21-year-old Nolan Bishop meets a seductive woman named Eva at a dark club in downtown Shreveport, Louisiana, little does he know his soul will be gone as soon as she is. Realizing she’s taken something from him, he finds out he has a very limited time to destroy her before he turns into something sinister and inhuman. In a race against all that is holy, Nolan has to find Eva and get his soul back while trying not to fall in love with Charity, the twin sister of the succubus who took his soul – all in 7 days.

Wow! What a read! I have to say Soul Rebel is probably my favourite C.J. Pinard novel to date. From beginning to end there is action, suspense and romance. Not to mention some great characters in Nolan, Eva and Charity.

From the beginning Nolan’s character drew me in. He is a real gentleman, polite and kind, with the ability to fall in love wholly and easily with the girl that pulls at his heart strings. However, after being left broken hearted early in the novel, C.J. Pinard has created a vulnerable, lovable victim of love that many females would find hard to resist! And with many reads these days focusing on lead female victims-come-heroes (at least the books I have been reading!), it was interesting to see a fallen guy be the main focus.

To make matters worse, whilst Nolan is coming to terms with being single again, he then has to deal with his disbelief that a redhead woman whom he met in a nightclub, Eva, is actually a female vampire, a succubus, who stole his soul after a passionate kiss! Little does he realise to begin with that he only has 7 days before he turns into a vampire himself unless he can get his soul back.

What will it take to make Nolan believe what Eva is? Although reluctant to believe, despite a warning, Nolan soon realises he has a mission on his hands. It probably feels to Nolan like he has been kicked when he’s already down. The reader really feels for this guy and constantly roots for him to find his feet and take back what is his.

Soul Rebel is so much more than a regular paranormal story with a vampire bite and then the human turning. I love the idea of souls being taken. It gives the novel more edge and heaps more darkness. And, to add to the tension is the time frame in which Nolan has before he turns – just 7 days. That’s 7 days for Nolan to realise and believe what has happened to him as well as try to get his soul returned.

Extra suspense is also included when Charity, Eva’s human twin sister, turns up in Nolan’s life. Charity has the same sexual attraction as Eva, and over time as they search for Eva together, Nolan and Charity begin to grow closer and have feelings for each other. Not only does this cause confusion with Nolan, after all she is the enemy’s sister and he’s already been given grief twice by females, but it also causes conflict within Charity.

Charity knows her sister has done wrong, but it’s the only way Eva survives (from taking good souls). Charity knows Eva needs to meet her end in order for Nolan to have his soul back but can she stand the thought of Nolan killing her sister?

As well as the thrill of the drama and adventure there is also a great moody and gothic atmosphere during some scenes, especially the evening scenes and when Eva is mentioned due to where she is living. Eva lives out of town in a Victorian style mansion and its Victorian style and when Nolan and Charity are trying to find her and take her by surprise there are some eerie moments and the reader can feel the fear and intensity as these scenes are written at a steady pace with the reader having no idea what the outcome will be.

Soul Rebel is definitely one for any paranormal fan to read. Due to the pace throughout it makes for a fairly quick read and yet has so much to offer. The reader can feel how Nolan becomes stronger throughout the novel. It is so gradual which makes it all the more real. The reader is certainly taken on a ride of all emotions of despair, anger and love. There is nothing obvious with this story. There are constant surprises throughout this novel. And fans of C.J. Pinard may enjoy a small overlap with her Enchanted Immortals series! I’ll say no more. But I would love to be reading a sequel in the not too distant future!

A copy of Soul Rebel was provided by the author, C.J. Pinard in return for an honest and fair review.

Soul Rebel is available on Amazon US and Amazon UK.